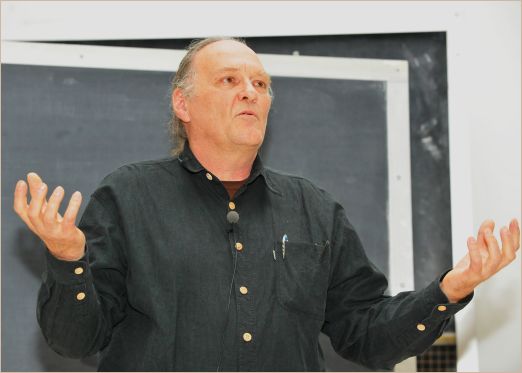 Many topics were under discussion at the second full day of Degrowth in the Americas Conference: finance and degrowth, transition towns, resilient communities, public banking, and much more.

The topic that most resonated with me, most likely because of their perspective on living in harmony with nature, was indigenous perspectives on degrowth. Robert Lovelace (pictured at right) of the Ardoch Algonquin First Nation, a soft-spoken teacher from Queen’s University in Ontario, began the discussion with a sad overview of past prominent white views on nature and indigenous peoples. John Milton, in Paradise Lost, wrote that the natural world is debased and naturally evil. Thomas Hobbs observed that the natural state of mankind is poor, nasty, brutish, and short. Even John Locke dismissed indigenous peoples as inferior.

Lovelace stated that capitalism works within colonialism and racism and cannot work without subjugation of indigenous groups of people and environment in which they live (and, I would add, holding down the 99%). He believed Locke failed to realize that the domestication of human labor would lead to unsustainable exponential increases in human populations (mainly due to increasing wealth) or to see the consequences of pollution, environmental degradation and climate change which would be brought about through the commodification of the commons. It is crucial, according to Lovelace, that we “reconfigure our environment.”

Lovelace talked about how, from an indigenous perspective, environment determines culture - from the use of energy to food security to population levels (traditionally kept low to be in balance with nature). He laid out his formula for how we should live: 1) never consume more matter than can be restored through “replenishment cycles” in a particular ecosystem and 2) never expend more energy than what you be replaced by what you consume. Both of these conditions, he said, “are mitigated by cultural knowledge.”

His last point could be a theme of the degrowth/localization/alternative economies movements, in that the solutions to the problems we face are found in the social and cultural realms as opposed to the political and technology sectors. Essentially, we can’t buy our way out or create enough technology to save the planet.

Marcelo Saavedra-Vargas, a professor at the University of Ottawa and originally from Bolivia, said that we need to decolonize our minds in addition to ‘degrow’, for the sake of future generations. He also said something that I heard again later in the day from a completely different workshop and speaker - that hope is paralyzing and it prevents people from taking action and overcoming problems. And action is instrumental if our society is going to change.

The indigenous viewpoint is taken seriously at the Degrowth conference, as are all positions. The event even kicked off with a Mohawk Thanksgiving address. Given how for the most part indigenous peoples have strived to live in harmony with nature for so many years, participants from all fields and backgrounds - from stabilizing population growth to creating local food systems to environmental governance can learn much from native knowledge.

Professor Saavedra-Vargas ended his discussion with an Aymara saying which is appropriate for the conference and for the world: Suma Qamaña, which means live and coexist well.

Suzanne York is a Senior Writer with the Institute for Population Studies,www.howmany.org