We’ve gone through two energy retrofits at our house in Walnut Creek. The first time was in 2007, the year we bought the house. The second was in 2014. The biggest impacts came from sealing and insulating our recessed can lights and switching to LEDs, both comparatively easy and inexpensive retrofits.

The first retrofit, done by Advanced Home Energy, a company that is no longer in business, included some air sealing and blown in insulation in the attic. Since we had just moved in, we didn’t have any data on the “pre-retrofit” energy use to compare to the “post-retrofit” energy use data. But one thing stands out for us: Recessed can lights. Ours were leaky. In the winter our hot air went right up into the attic to very inefficiently heat the neighborhood. Ori Skloot and the crew from Advanced Home Energy, from the attic side, sealed and insulated the can lights, stopping a lot of energy waste.

FYI. A study of northeastern homes in the United States found an average of 23 recessed-can lights per home. New California houses have an average of six downlights in their kitchens alone! Our house was built without them in 1951, but the previous owners had seven of them installed.

But something else resulted from the simple can light retrofit. The incandescent bulbs in the can lights caused the heat sensor, a safety mechanism, to turn off the light. Incandescent bulbs give off a lot of heat that can’t escape when the can lights are sealed and insulated. Home Depot had a sale on LED can lights, which solved our problem. We went on to replace all our incandescent lights, and CFLs with LEDs. I can’t say how much electric energy we saved, but around that time, when I looked on the PGE website and clicked on the “How Does Your House Compare?” button, we moved from pretty efficient to most efficient year-round compared to similar homes in our area. Bragging rights secured! We use so little electricity that installing solar panels doesn’t make sense.

Our gas use was not so good. Our second retrofit in 2014, done by Stewart Heating and Air, included insulating the walls, and some more air sealing—both the ducts and the exterior walls. (We met Bill Stewart, the owner, at an event introducing the Energy Upgrade California program, put on by Sustainable Contra Costa at the Walnut Creek Library.)  We discovered that the North side walls had been insulated by the previous owner. We found the patched-up holes where they injected the insulation into the walls from the outside (see photo, below, left). So we had the other walls insulated with blown in cellulose insulation.

We had pre-retrofit energy data this time, and after taking into consideration the weather year to year, we saved about 10% on our heating energy. But when I do the PG&E comparison, I find that we are about halfway between the average and the most efficient similar homes in our neighborhood. Okay, unless you are the editor of a magazine about green homebuilding and renovation, as I was at the time. No bragging rights this time, only guilt. 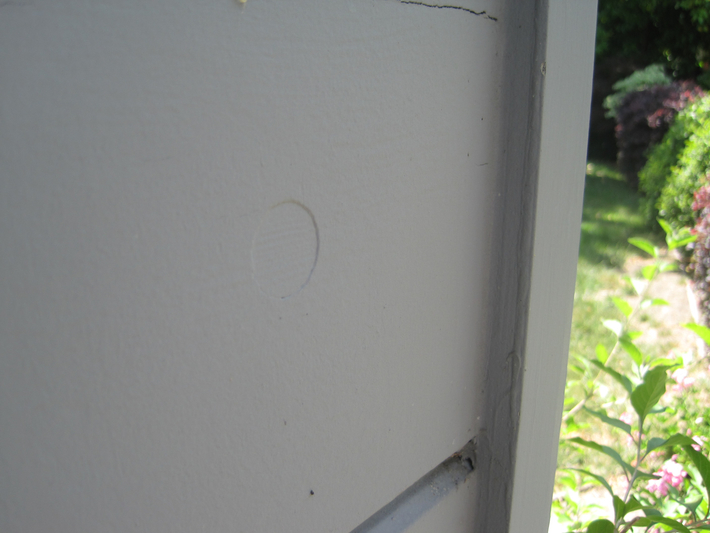 There are plenty of reasons to move to an all-electric home powered by renewable energy, and to stop using natural gas (AKA methane). That would be a big next step for us, since we use gas for heating the air and water in our house, and for cooking. The first step may be to replace our gas burner with an induction cooktop. That’s a hard sell in a house where 50% of the occupants is a serious foody. Then we could replace our gas water heater with either an electric heater or an electric on demand water heater. Finally, a heat pump for both heating and cooling would make us all electric and gas free.

That will wait for another day, or our next house. In the meantime we still have electric energy use bragging rights and nagging guilt about our gas use.

For more on our two retrofits, go here and here.

For the second retrofit, we were aided by rebates from BayRen. And they sent us a carton of LEDs to boot.

Here is evidence that someone blew in cellulose insulation into our walls.