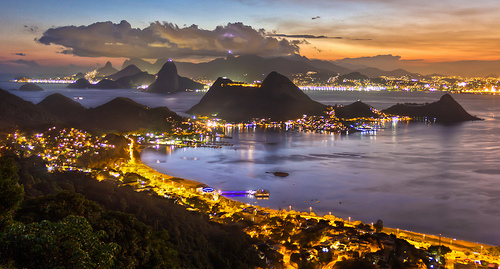 In less than a month the world, or at least the environmentally-inclined members of the world, will be in the throes of the UN Conference on Sustainable Development (UNCSD), or Rio+20. Despite the official summit focus on the green economy and sustainable development, there are many groups and individuals working hard to turn attention toward population growth.

There are a handful of population side events occurring on-site that are not part of the official talks (see below). According to the UNCSD website, more than 500 on-site side events have been organized by governments, UN Major Groups, organizations from the UN system and other international organizations and will take place in the lead-up to the conference and during the summit itself. Of course there will be many events dealing with population-related issues (i.e., gender equity, women’s health, inequality), but only a few address the population component directly, at least from the event descriptions. We will list those that do below.

The UK Royal Society last month issued a report urging the world to address population, consumption, and environment issues at Rio+20. The importance of linking these issues was recognized at the 1992 Rio Earth Summit, but has not been adequately dealt with in recent years. This is unfortunate, as human population numbers are still growing, people are consuming more and more, and the environment is increasingly plundered for resources to meet these demands.

Royal Society scientists, along with the United Nations Population Fund (UNFPA), will be hosting a side event and discussing how “rapid and widespread changes in the world’s population, coupled with unprecedented levels of consumption present profound challenges to human health and well-being, and to the natural environment.” They state that the “combination of these factors is likely to have long-lasting consequences for our finite planet.” This program, coming early in the series of Rio events, will hopefully reach and influence some UN and government officials.

If there is to be any success in creating a healthy planet, efforts to stabilize population growth must be part of Rio+20. While the global rate of population growth has slowed, approximately 80 million people are still added to the planet every year. Most of that growth will be in Sub-Saharan Africa. Globally, there could be a total of 9.3 billion people by 2050. But if the world takes action in Rio and addresses the impacts of population growth, it could keep that number down to 8 billion people and make a sustainable future far more likely for future generations.

A crucial piece of this is recognizing and improving rights of women and girls. Countries need to make greater investments in women and girls, including family planning and reproductive health, education, general healthcare, land rights, improved gender equality, and economic development. This is also a cost-effective way to significantly slow population growth and improve lives. And by investing in programs to alleviate poverty – combined with empowering women to make their own choices in family planning – the payoff will be stabilizing population growth, a factor in improving economic conditions and overall quality of life.

Decision-makers at Rio+20 should put their efforts into lifting the world’s poorest 1.3 billion people out of poverty, improve the rights of women and girls and support ways to empower them, positively address population growth through family planning and reproductive health, reduce unsustainable levels of consumption (including alternatives to Gross Domestic Product), and overall implement approaches that protect people and the planet.

If you are going to be in Rio, or are just curious what population-related side events are taking place, below are some currently listed on the UNCSD site.

People and the Planet: Population, Consumption and the Environment

This event by the UK Royal Society will focus on the linkages between population, consumption and the environment. It will demonstrate the importance of considering both demographic variables and consumption patterns if sustainable development goals are to be achieved.

From Rio to Cairo to Rio… and Beyond

Population, Rights and Sustainability: Voices from the Global South

This workshop will focus on the perspectives of Voices from the South on how addressing population dynamics at national and community levels in ways that respect and protect human rights can make a significant contribution to global sustainable development goals.

Mary Robinson and the Aspen Institute’s Global Leaders Council for Reproductive Health (GLC) will convene an official side event to raise the profile of human development, gender and reproductive health within the Rio+20 UN Conference on Sustainable Development.

Access to reproductive health and family planning is an important part of strengthening women’s capacity as leaders in sustainable development, yet in too many places around the world women’s access to these services is limited. Reducing unintended pregnancies and giving families the tools to determine family size can improve socio-economic status of women, reduce strain on the environment, and improve conservation of resources – all of which make significant contributions to sustainable development and resilience in the face of a changing climate.

Youth SRHR in the Context of Sustainable Development

When women have power over if, when and how many children to have, communities are better equipped to adapt sustainably, access education and health, and manage community resources. Yet, in some regions young women ages 15-19 are twice as likely to lack access to the contraception they want and need as women over twenty. Collectively, we as young people have a critical role to play in the shaping policies and programs surrounding young people’s sexual and reproductive health and rights, and a just and sustainable world.

The International Planned Parenthood Federation (IPPF) and the Government of Denmark in collaboration with the Government of Brazil (TBC) and proposes the ‘Dynamics of Rio: Population, Women and Rights’ Side Event. The high level Side Event brings together a high level panel of governments and civil society to ensure that the Rio+20 outcome document highlights the centrality of sexual and reproductive health and rights (SRHR) to sustainable development.

Suzanne York is a senior writer with the Institute for Population Studies/HowMany.org