Several years ago, when we first moved into a house in the area, we planned to become fully organic and plant fruit trees, grape vines and a vegetable garden. I bought several books on organic fruit tree growing. One central theme that jumped out of the pages was that, wait for this, weeds are not bad. Rather they are highly beneficial to trees and vines because they pull minerals from the soil and subsequently make these minerals available to trees. Fruit trees evolved and thrive along the hillside areas that are the transition point between higher elevation forests and lower elevation grasslands. Think about trees in nature. They certainly don’t have people or animals pulling or killing weeds around them!

So I read all of this information, planted 60 fruit trees and 600 grape vines and started a garden. But being a product of Central Valley farming family, it was hard to watch certain “invasive” weeds seemingly taking over.  I was determined to stay organic and not spray weed killer, so we spent our first summer chasing weeds we thought were aggressive invaders such as Dandelions and Marshmallows with a hoe and tilling our soils with a roto-tiller to try to keep these and other aggressive invaders at bay. The harder we worked, the more these weeds popped back up. Finally, after realizing we were losing the battle, I decided to go back to further reading and research. Surprise, surprise. These two “weeds” are two of the most beneficial plants because their long tap roots go deep and pull up minerals for use by trees and vines. They both are edible as well, taste great in salads and are full of healthy vitamins and minerals.  I also started to learn interesting new things such as about Permaculture, such as that it’s not good to till the soil since tilling brings in an unnatural amount of oxygen and majorly upsets the soil microbiome of bacteria, fungus, etc. I also learned that in nature there is no such thing as a dominant invasive weed. Dandelions and Marshmallow plants for instance are both edge type plants that primarily thrive along the edge of natural lands. (or vineyard lands wherein the owner is running around like crazy trying to keep them from going to seed). 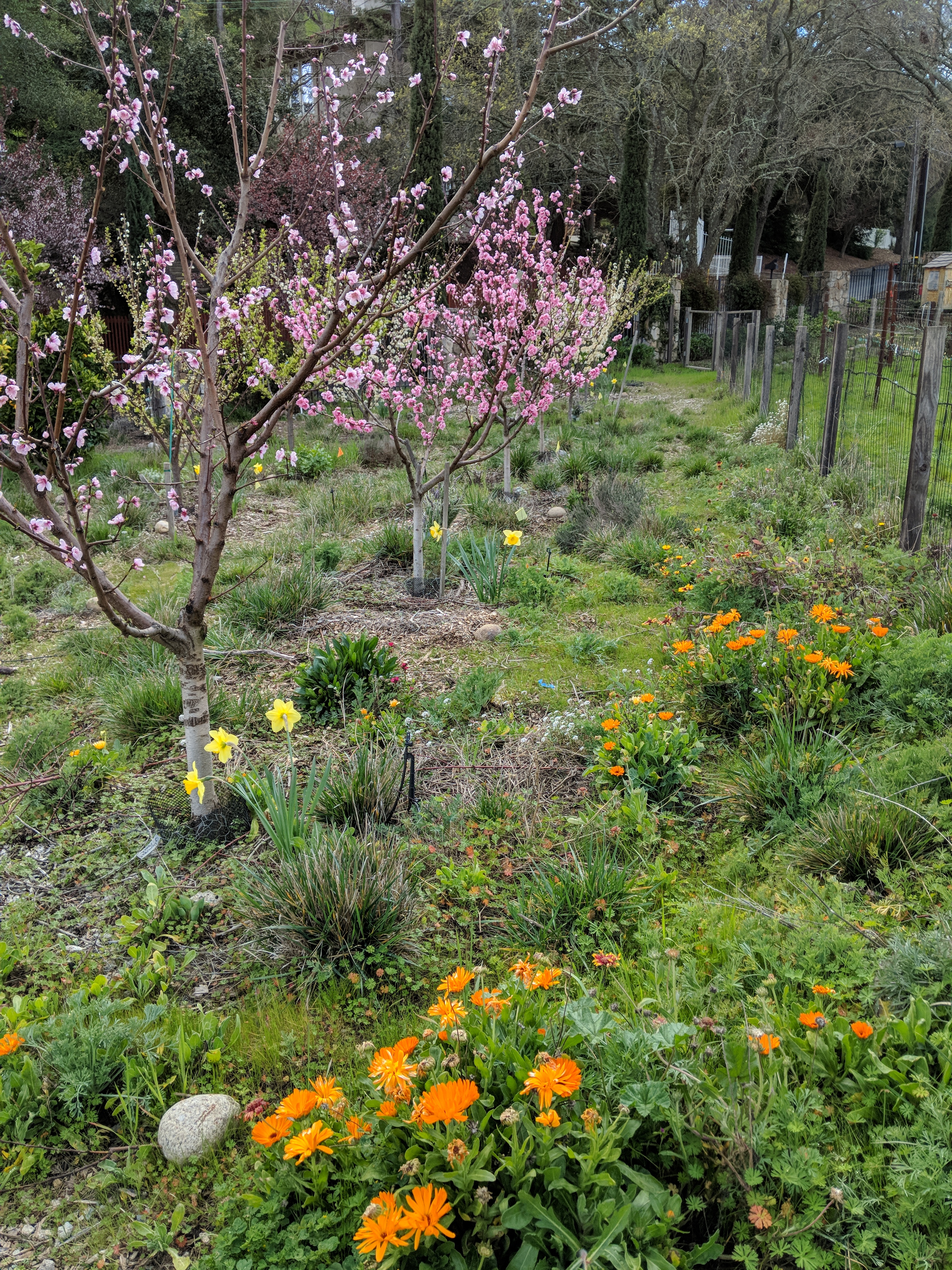 Fruit Trees and "Weeds" in Spring

Sure enough, once we stopped trying to control what grew under our trees and vines, nature created a beautiful diversity of plants, (most of which we previously called weeds).  These pictures show the abundance of plants growing under and around our trees. The plants, previously called weeds, on our property are supporting an astonishing number of bees, birds and other wildlife. In the evenings we now get a nightly symphony of musical thank-you’s from all the happy critters living under and among our trees and vines! 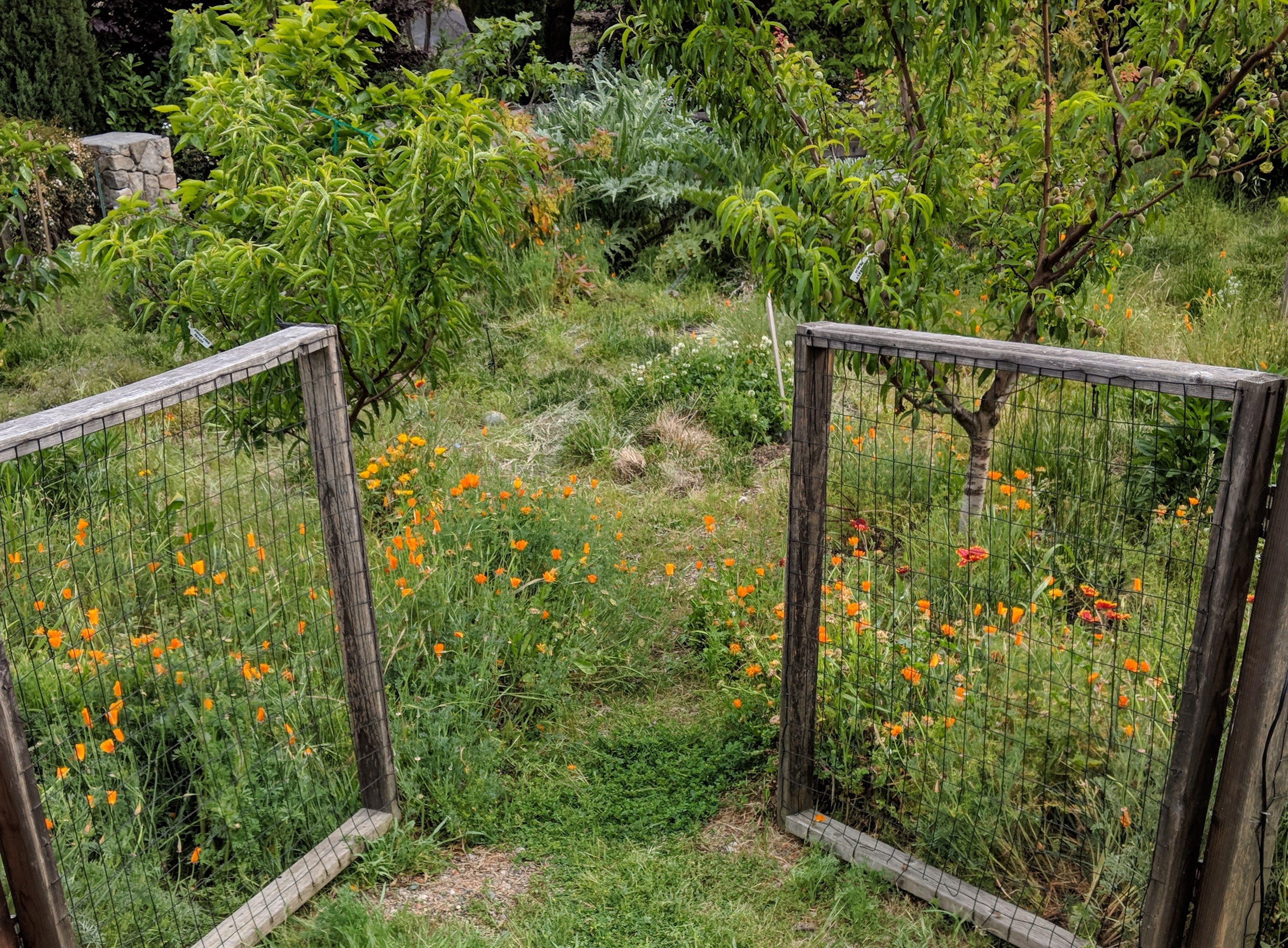 Speaking of bees and happy critters, recent research has found a direct link between bee deaths and Glyphosate, the active ingredient in Roundup and other weed killers. https://www.popsci.com/roundup-glyphosate-bee-microbiome. There also is growing evidence that Glyphosate is cancer causing and creates a host of other illnesses in humans as well. I will write more about this in future articles. At this point, I would highly encourage everyone to avoid using Roundup or any other non-organic weed killer, as they are very likely not safe for bees, insects or humans. They also destroy soil life.

So what else can you do with this information? First, try embrace those plants, previously called weeds. They will create beautiful green landscapes, particularly in the spring. You can also use drip irrigation on your trees, shrubs and vines to prevent them from growing during the summer in places you don’t want them. Sheet mulch, as discussed in another article in this newsletter, is another great option to prevent weeds from growing where you don’t want them. Even a thick layer of wood chips will prevent most weeds from growing, and you can get free loads of wood chips from most tree service companies. Just ask them for a load of chips that are clean and from a larger tree instead of from brush. And if you still really want to get rid of plants previously called weeds there are many organic weed killer formulations that are highly effective and are much less toxic to animals and the environment. You can even make your own out of vinegar, soap and salt. The internet has many recipes as well as preformulated products. Here is one site for recipes:  https://www.everydaycheapskate.com/home-and-family/hands-down-the-best-way-to-kill-weeds-and-its-not-roundup/